Days NOT on Market

I'm reviving a series on how NOT to select a rep. The intro was posted previously. You can find it here. There was also a chat about the not-validity of evaluating an agent by the ratio of sale price to listing price (You know the drill: "SOLD OVER ASKING!!") ... That piece is here.

Another common suggested criteria is "Average days-on-market".  A low number is deemed an indicator that the agent prices and markets well, allowing properties to sell high and quickly.

We agree that a properly priced home will generally attract the right buyers and receive the best offers.  And, as a result, it will typically mean a prompt sale.  But list price is ultimately the seller's decision and there can be reasons to "test" higher prices.  We can (and will) decline the listing if we have major problems with the plan, but sometimes the logic is there.

For example, a common reason for "testing" a higher-than-likely price is an estate sale.  An executor may feel pressure to demonstrate to the heirs that every attempt was made to attract the highest price.

All that said, the ultimate "days-on-market" stat is often deceptively low for much the same basic reason that sale:listing price ratios are meaningless.

New app for us iPhonies (and Webbies, too)

Anybody done mortgage rate comparisons at RateSupermarket.ca?  What did you think?

We haven't been serious viewers/users of the site but it reads as a fairly neutral place to get an idea of current comparable real mortgage rates.  I quite like how straight forward they are about their independence and how they make money (see the "About Us" tab on their site).

How do they make money? Advertising and referrals.  The advertising is clearly identified as such.  And the referrals come only if you ask.

I looked at them a little more closely today because they announced an iPhone app connected to their service.  It seems pretty straight forward.  You could be looking at a home and start to feel that "what if I bought this" tingle.  Out comes the app and tells you who wants what rate today for whatever type and term you ask about.  It also has a mortgage calculator to check the actual payments.  Could be handy.  You don't have to actually talk to anybody or give out your information to anybody to get a solid idea of what would be involved mortgage-wise.

All that said, if you know you are house-hunting you should get pre-approved.  Find a good mortgage broker (we know several) and go through the process.  You will know what you can afford, you can lock in a rate, and you will be stronger at the negotiation table.  It's all good.

If you're interested in real-estate related apps, you might want to have a peek at a series of earlier posts on the subject: Part 1, Part 2 and Part 3

Posted by Unknown at 2:01 PM No comments:

Death, Cars and not a thing to do with real estate

An article on US traffic deaths came buzzing by me (at moderate speed) from two different directions yesterday and today that had my head spinning so fast I could barely scratch it.

Here's the basic item, via the Globe and Mail: 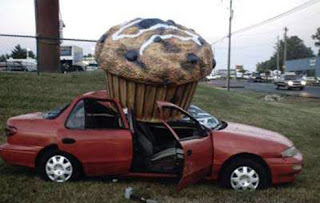 In summary, traffic fatalities in the US are falling.  Increased speeds, volume and distractions (phones, etc) are being more than compensated by improved technology, enforcement and education.  Seat belts, airbags, anti-lock brakes, crumple zones, and engines that fall out in a crash instead of landing in your lap seem to be helping.  Then there's radar, breathalyzers, and the surrounding information and awareness campaigns.  Kids are still generally as stupid as we were on a lot of things.  But a whole lot more of them are smart enough not to drive hammered.

All interesting and straight-forward.  But here are the bits that snuck in and got my "Wow" attention.

. There were still about 33,000 people killed in the US in 2010 in traffic accidents.  The multiplier to account for injuries is probably significant.  That's a lot of death.

. The Globe notes that there are now over five times as many vehicles on the road as in 1949.  Those vehicles are travelling 13 times as many miles, and they are doing it at higher speeds with much greater congestion.  The population of the US has doubled.  Just under 33,000 deaths in 2010 ... how many in 1949? (Think for a second, before you peek)